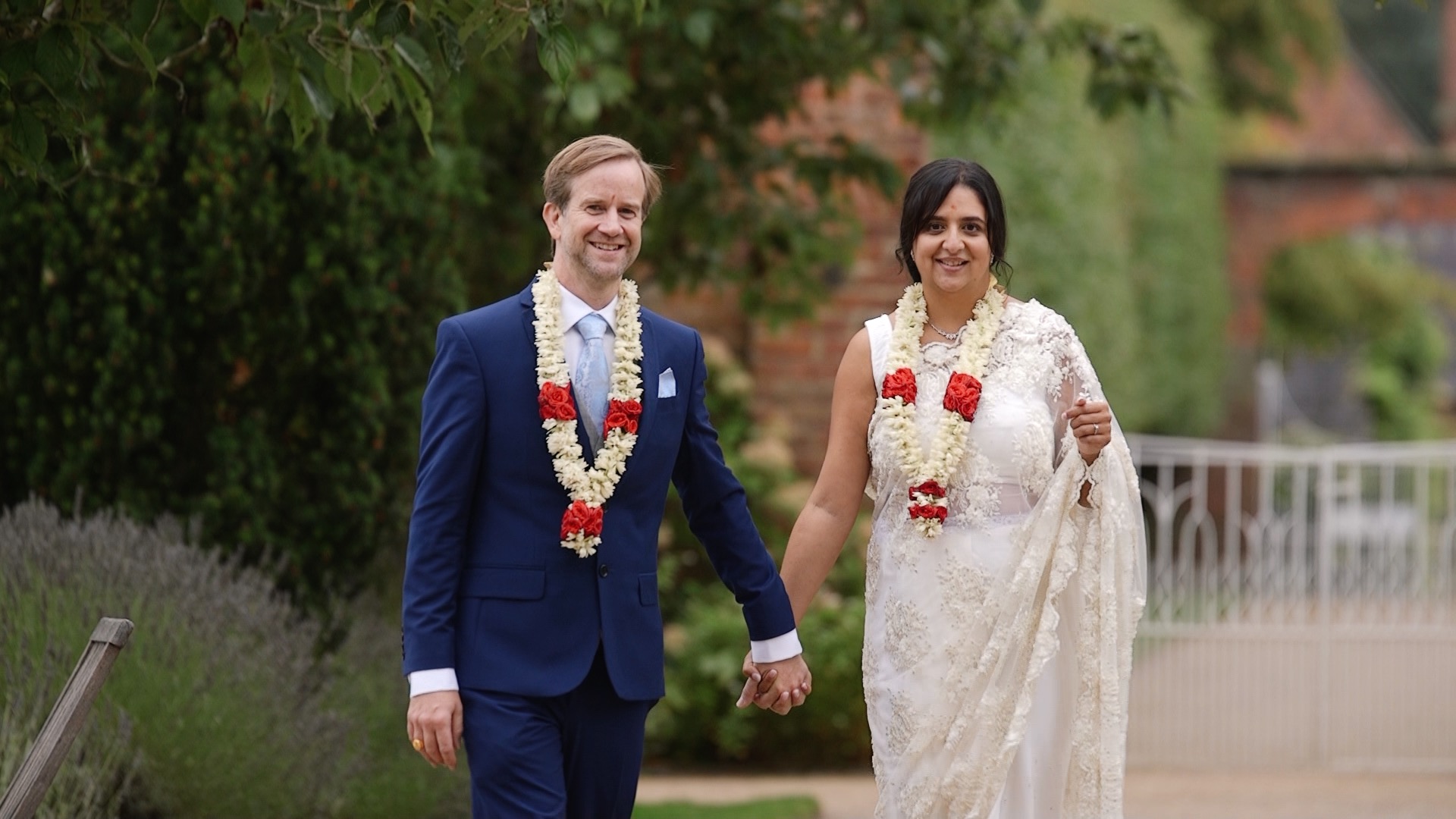 On the day of the wedding I arrived at Combermere Abbey nice and early, giving myself plenty of time to decide on camera placement for the ceremony, and get some shots of the beautiful Combermere Abbey grounds. A former monastery Combermere Abbey is nestled in some of the most breaktaking grounds.

Shortly after I arrived Martin and his best man arrived, closely followed by their wedding guests. Guests began to take their seats inside the Edwardian Glasshouse – a simply stunning building, with amazing views out over the Victorian Walled garden. The Parsi ceremony began with the Groom’s Ceremony, or the Achu Michu, where the mother in law wards off evil vibes using raw eggs, coconut, dates and rice. Once the Achu Michu ritual is complete it’s time to welcome the bride.

Zalena made her way through the Victorian Walled Garden in a stunning white sari. At this point Martin had a white cloth, Parda, being held in front of him so that he couldn’t see Zalena as she walked down the aisle. The Ara Antar ritual began with Zalena and Martin sitting on opposite sides of the Parda, but holding hands through the bottom. The ritual involves the priest circling them seven times with a white thread. When the ritual was complete the Parda was dropped and Zalena and Martin finally got to see each other.

The Chero Bandhavano is the next ritual, the priest begins the prayers and officiates the marriage.

One of the best parts about capturing a Parsi wedding ceremony is being able to experience different cultures, and seeing them being brought together.

After the Parsi ceremony Zalena, Martin and their guests made their way into the Victorian Walled Garden to enjoy some canapés and have some photographs.

After the first drinks reception it was almost time for the civil ceremony, so Zalena and Martin went to get changed. Their guests made their way back to the Edwardian Glasshouse and took their seats awaiting Zalena and Martin.

The civil ceremony was a lovely addition to the mornings Parsi ceremony, it really celebrated the two cultures joining together through the love of Zalena and Martin. It was a pleasure to witness them officially tie the knot in front of all of their loved ones.

After the civil ceremony we once again made our way back outside for a short drinks reception and some more photographs. We made the most of the stunning Combermere Abbey grounds as we explored for portrait locations – you definitely aren’t short on choice at Combermere Abbey.

Having two ceremonies meant that the day flew by so quickly, and it was soon time for the speeches and wedding breakfast. The speeches were wonderful, Zalena’s three brothers all did a speech, as well as her father, and Martin’s best man.

Zalena and Martin had a fantastic wedding day and it was a pleasure to capture!

If you’re looking for a Cheshire wedding videographer to capture your wedding at Combermere Abbey just get in touch via my contact page – I’d love to be a part of your special day. If you’d like to see the wedding videography prices and packages that I offer just click here to head over to the prices page. Follow Vision Wave Weddings on Facebook for the latest sneak peeks and highlight videos.